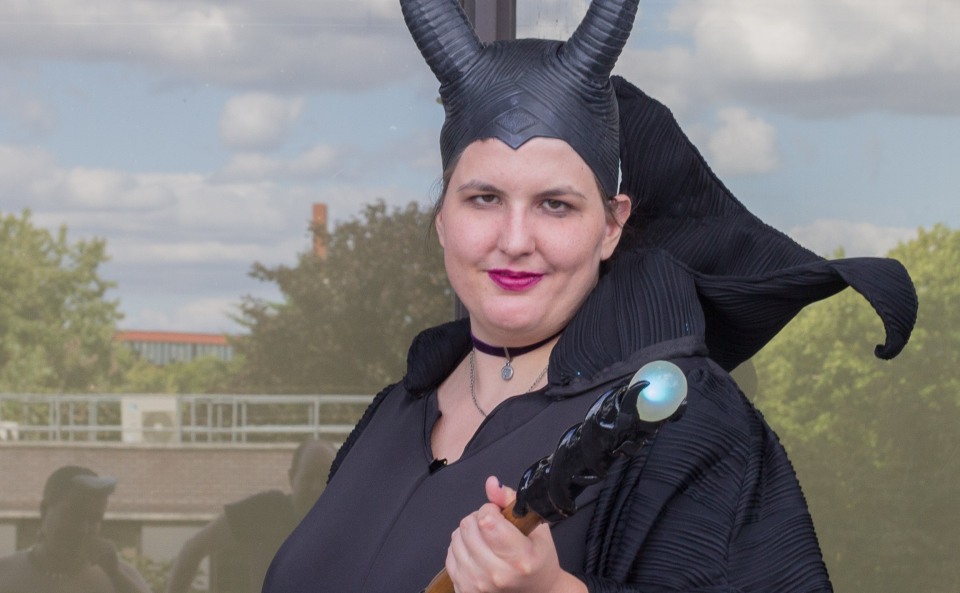 This project was so fun! I’m tempted to make another one to keep.

My brief here was to create a staff for Mel, who was planning a Maleficent cosplay. The staff should light up, and ideally be in some way interactive. Thankfully the actual staff part would be supplied for me by Mel, thus saving you all from the inevitable jokes about getting wood.

There were two major parts to this project; wiring up the electronics that power it and give it the interactivity, and creating the glowing orb. Obviously this all had to sit on or within the staff (which only had a diameter of around 3cm), so I didn’t have much room to work with.

For the brains, I didn’t have enough space for a regular size Arduino board, or even the Nano that I used for the last project. I decided to try using a Digispark board, which as far as I’m aware is the smallest Arduino-like board out there:

In order to make the staff interactive, I added another little board. This is a ‘MPU-6050’, and contains a gyroscope and an accelerometer:

Add in a third board to provide power (a boost regulator, to get 5v from a 1.5v battery), a switch to turn it on and off, and a button to provide some input should it be required (to turn on rainbow party mode, obvs) and we’re good to assemble the electronics:

Some of my horrible soldering

Excellent! Now for the glowing orb.

I’ve been watching a lot of Peter Brown’s ‘Shoptime’ lately, and if you like making things or seeing things being made you should maybe take a look at his work. I’m a big fan, and watching him has left me with a strange desire to cast things out of resin.

I figured if I used resin for the orb, I could embed some LEDs within it. I could add some pigment and maybe *some* sparkles to diffuse the light, and that’d give a nice effect like it was the orb itself glowing, rather than obvious point sources within it.

Don’t worry, crafters! No actual eggs were harmed in the making of this staff. This is actually a bouncy rubber egg that we owned for some reason. Anyway, I submerged the bouncy egg in some RTV (room temperature vulcanizing) silicone and left that overnight to create a mould. The silicone solidifies but stays soft and rubbery, so you break the egg out to leave a mould. I wired together 5 LEDs into a little ball, and inserted them into the void left by the egg, suspended via the judicious use of a cotton bud: 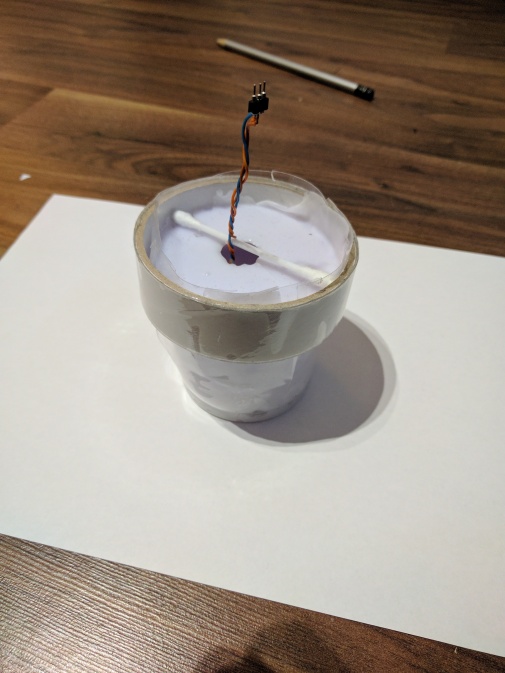 There are two common types of resin; epoxy and polyester. For this project I used epoxy resin, as although it’s more expensive its safer (polyester resin emits fumes which are harmful) and it’s much more pleasant to work with (polyester resin emits fumes which stink. I mean really stink. It permeates everything and the smell never ever goes away!)

The epoxy comes as two liquids which you mix together, and once you’ve done this you only have a limited working time before it starts to set. Basically, I’m making excuses here because I was rushing, panicked, and forgot to take photos of the very precise “adding sparkles” phase. Anyway, I mixed the resin with some very fine glitter powder and poured it into the mould.

You can see here how the enclosure fits inside the mount, and how the mount fits on the staff

Here it is all put together

After I’d printed the enclosure and extracted the now-solid orb, the next job was to put this all together:

After I’d glued everything together, I loaded some basic software to check the accelerometer was working

Looking good, if a little sensitive at this stage! The software I ended up writing had a couple of different gestures it could recognise:

-If the staff was stationary, or not moving very quickly it would gently cycle between pre-set greenish-purpley colours
-any rotation around the axis of the staff would make the staff increasing red. If you span it between your palms, it would glow a violent scarlet
-If you held it vertically and stamped the foot of the staff on the floor, it’d flash bright white before fading through green back to black. The harder you hit it, the brighter it’d get.
-Obligatory rainbow party mode, activated manually.
-Bright white mode, activated manually.

I had hoped to write more gestures but I was limited by the tiny memory on the Digispark board (the majority of the already-small space was taken up by code to manage the accelerometer, leaving very little for the actual sketch)

Once I’d refined the software, the last stage was to sculpt and paint the outside of the enclosure and the mount. The wooden part of the staff had been provided pre-decorated with a dark spiral along it’s length, so I tried to stick to this motif with the sculpting.

The Sculpting was done with Milliput, and painted with black enamel paint. 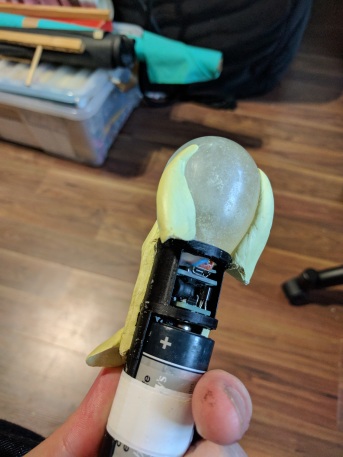 You can see a video of the finished staff below. with some of the gestures in action:

I’ll upload the STL files for the printed bits to Thingiverse, but it’s worth noticing that we had a bit of trouble with the design. The area shown in red below formed a bit of a natural week spot where the layers of the 3D print started pulling apart.

Structurally this was fine but it did mean that the battery wasn’t being held in correctly and it was prone to disconnecting, particularly during the ‘smash it on the ground’ gesture. If you saw me running around at Nine Worlds with a tube of glue and some electrical tape, I was probably trying to fix this! (We glued it and clamped it overnight between some books, and it was mostly OK after that!)

And finally, the cosplay. Mel made a pretty magnificent Maleficent!